[I have posted high quality photos in a subsequent posts as  I brought my professional DSLR camera for this deployment.]

This month I volunteered to assist with the FEMA Surge Capacity Force , an effort to enlist employees from the executive branch agencies to help recovery efforts from the trio of hurricanes  (Harvey, Irma and Maria) during the 2017 Hurricane Season.    Ironically, during our deployment training we actually witnessed a fourth hurricane (Nate) and were required to “shelter in place” during our training as the tropical storm remnants of Nate made their way through our training site in Anniston, Alabama. 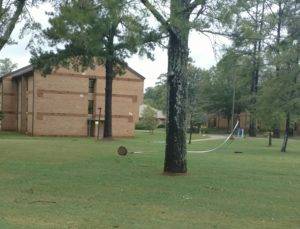 (minor damaged sustained as a result of Hurricane Nate on the barracks property: fallen over volleyball net.)

As background, I had been supporting environmental response activities relating to the first two hurricanes as part of my work with the EPA Emergency Operations  Center (in the basement of EPA’s Headquarters Building in Washington, DC) as part of the Situation Unit, reviewing “Situation Reports” (SitReps) and developing management reports which were used by  senior officials at the agency to keep track of the storm cleanup activities and impacted sites.

From the get-go the deployment activities started out a bit touch-and-go, and this remained par for the course during our training and eventual deployment. The mantra has been: be “FEMA 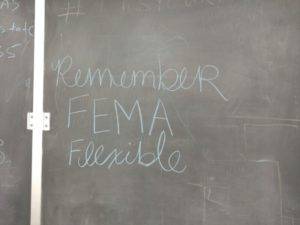 The photo on the right is from  one of the classrooms in the FEMA Center for Domestic Preparedness (CDP)  scrawled on blackboard from a prior class, in a prior wave.

We were told that we would receive deployment requests via the Deployment Tracking System (DTS).  I received my deployment request while hiking in the fall woods of Rock Creek park on a Sunday around 1pm and was told I would need to be in Atlanta Georgia NLT 5pm on Wednesday of the same week! This meant I would need  to setup travel and get a series of shots required by the EPA health and safety folks:  Tetnus, Flu, Hep A and Typhoid (as they didn’t know if they would send us to PR or the mainland). Quite the adrenaline rush trying to get prepared.

I arrived at the Atlanta, GA airport with friends Joey and Dwane, two EPA colleauges who were on my flight and we had unhealthy of airport food (a trend continuing in Anniston) and were greeted at the airport by wary FEMA greeters who directed us to “Bus 2” one of many buses which took us all to [dinner] in Anniston, Alabama and subsequently  to our “lovely” accommodations at Shacco Springs, a Christian retreat center an hour away in Tallega, Al.

(Greetings from Chacco along with a greeting about God.)

Fast forward… When we  first arrived we quickly were issued “Walmart greeter” type vests and were told to wear them in order to maintain uniformity and professionalism, an apparent criticisms of Katrina relief efforts.   This photo is one of our first photos, a bunch of EPA RTP,  R2  and HQ staff gathering after our first day, shortly after an impromptu yoga session at lunch, on the lawn.  FEMA was quite specific that we were not to walk on the lawn and to stay on sidewalks at all times, unless we were going to picnic tables so, I guess with yoga, we were ‘breaking the law’… 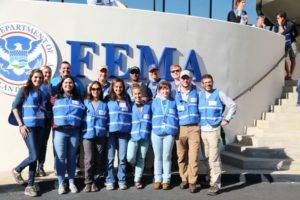 The photo was from the entrance to CDP.  This was our first view of the CDP building.   This building was an enormous cavernous  building with hallway after hallway. 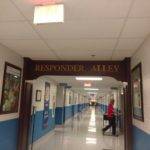 Learning  a bit about the history of the building it was one of the old facility buildings part of the Fort McClellan army base , decommissioned in the 1990s. The building was turned over to Department of Homeland Security. 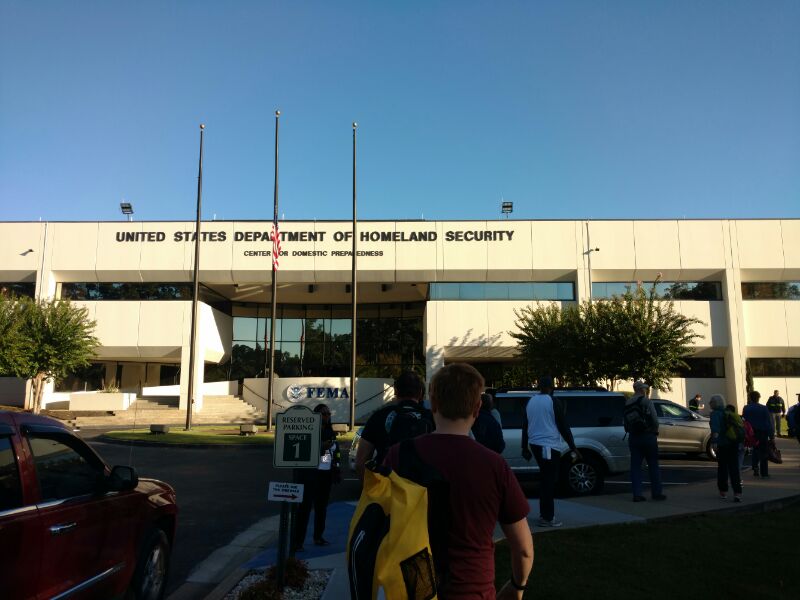 We were a wave of 300+  people and we were wave 12, another class, wave 13 followed with 500 people.  All of these people filtered through the  training facility over a week pe 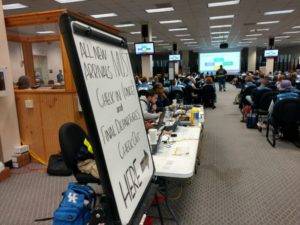 riod with the purpose of being deployed to assist with hurricane relief in Florida, Texas, VI or Puerto Rico.   The below photo is taken in a large group room  called the “library” but had no books.   While we were waiting for our assignments of sub teams: DIS, EHP, Call Center, Individual Assistance, Logistics among others]. We took ‘safety training’  and passed time with filler activities until staff were assigned to teams which happend during regular interruptions in the units.  On the right is an example of one of the training slides from our “Safety Briefing”. 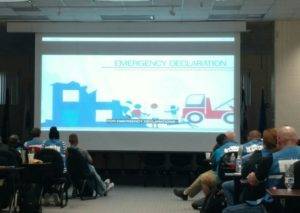 So, the long wait was over;  we  had waited in the big room for what seemed like hours.  We had completed five separate skills assessments and ares of interest. First, when we applied to the FEMA Surge, from the comfort of our desks, we wrote: (1) essays explaining our areas of expertise and how ew would fit into specific categories, (2) while still at the agency we were asked to fill out spreadsheets with our skills and expected that these skills would show up in the Deployment Tracking System  “DTS” (3) when we arrived in Anniston, we were asked to hand write a third assessment detailing our skills.   I put down, Information Technology as well as my Environmental Skills.   (4) We were asked we wanted to help with field work and if we were, we were asked to go to a specific room and put our name on a “list”.   When we did that,  our names went into a black box to determine where we were going and which team we would be added to.  I kept thinking to myself “be FEMA Flexible…”

I was chosen for the  Environmental And Historic Preservation Team.  From my cursory understand 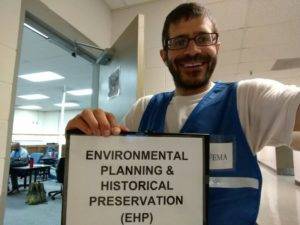 ing, looking at the linked web site as well attending the space filler training, we will be working on  environmental reviews and historic assessments for projects > $1k  and projects which are not emergency or lifesaving measures are needed (where FEMA is involved.)  This likely will involve NEPA assessments, CAA, CWA and RCRA and CERCLA cleanup accountability but, more in depth is unknown at this juncture.

I nicely suggested that the  instructors to setup a conference call with employees from different waives which were involved in field work and, the conversation with them  helped immensely.  The woman we talked with is working in TX and assisting with an environmental review; she has met with city planners  and writing up a report from a field office in an abandon warehouse.. we didn’t get much more time to learn about the who- what -when-where but,  at least it was a good start. 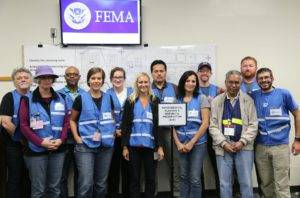 At this point in the training, we didn’t know where we would be deployed but had an inkling that it would not be PR or VI as they were still trying to recover from the disaster and environmental programs from FEMA don’t come into play until recovery is well underway (and presumably power is restored).    So, this left the options as R4 or R6 (FEMA regions are the same as EPA regions) so, 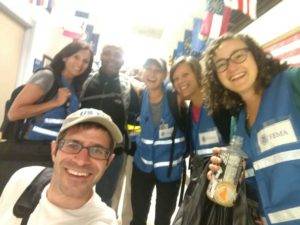 Our instructors seemed to know where we were going but, kept us in suspense and as of this writing (on a bus) we still don’t know where we are going, other than to Orlando Florida.. The team is a great group of people, I hope we are  all able to stay together but, we still don’t know more than that we are going to Florida.   [ More on deployments later and the mess up with that and, DTS.]

We  attended training classes with a very nice staffer, Dr. Prasad Inmula.  He provided some introductory information on the what the EHP  program does as as well as a variety of other FEMA computer based training.   The classes also served as a way to kill time so we could each receive a FEMA ID card and a so-called “golden ticket” (Willy Wonka reference, presumably) whi 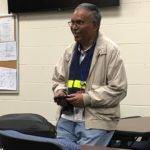 Our team received a bunch of technology. We each received an Ipad Pro and an Iphone 6s along with a Dell 7480  i7 laptop (docking 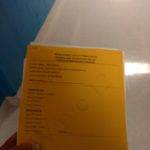 station and mouse).  It seemed like holiday presents in October, even though we were told  we need to retain the boxes in our suitcases so the items could be refurbished for the next team in ~ 45 days. Stack of Technology: 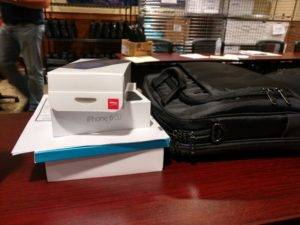 We are required to log into DTS each day, it is  sort of like a punch clock system for government accountability and to ensure that folks aren’t dead or lost.   The system worked well at the beginning but turns out to be somewhat flawed with subsequent deployments. Each morning at 6am prior to breakfast 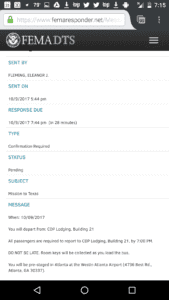 we would log into the system and provide clarification on our location and that we were still alive.  The system also provided deployment orders.   There appear to be a few flaws with the system, one flaw; last night we received a mistaken deployment order at ~5:44pm saying we were to board a bus by 7pm,  heading to the airport for a TX  deployment  the following day.  I quickly jumped in the shower packed and brought my stuff down to the cafeteria, only to find out that that we were instead taking a bus to FL, leaving the next morning.. “FEMA Flexible”.. sigh.  Unpacking and re-packing..

Food.  We received lots of food: lots of fried food with a side salad.  Below are photos from breakfast, lunch and dinner.  Given the unexpected size of the crowds, foam plates and individually wrapped silverware packets were used 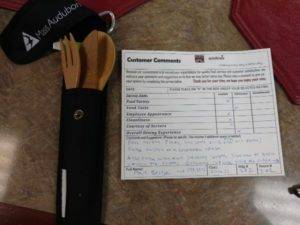 for breakfast, lunch and dinner. (The dining staff have dish washing facilitates and plates and cutlery, they weren’t using it given the surge.)  Fortunately, I had the foresight and brought some bamboo cutlery.  My  comment card to the dining staff is below. 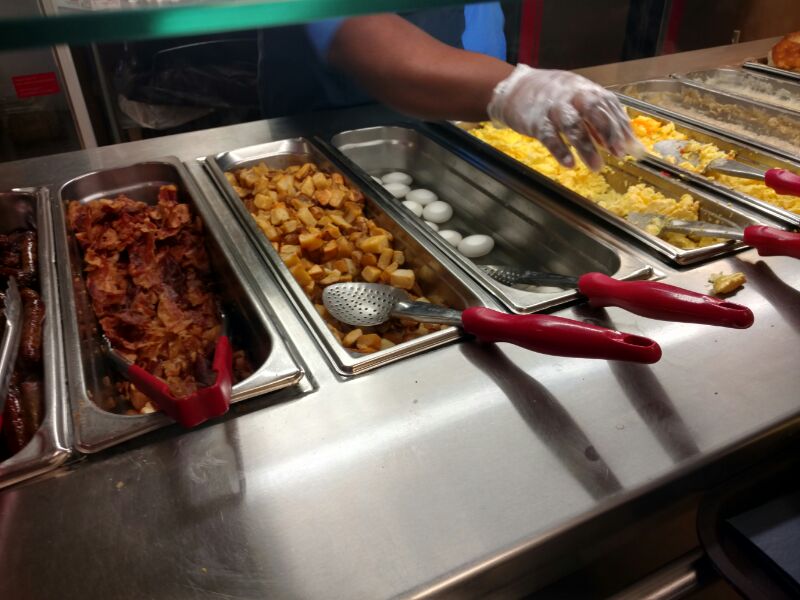 Lots of orange and a wrapped apple. 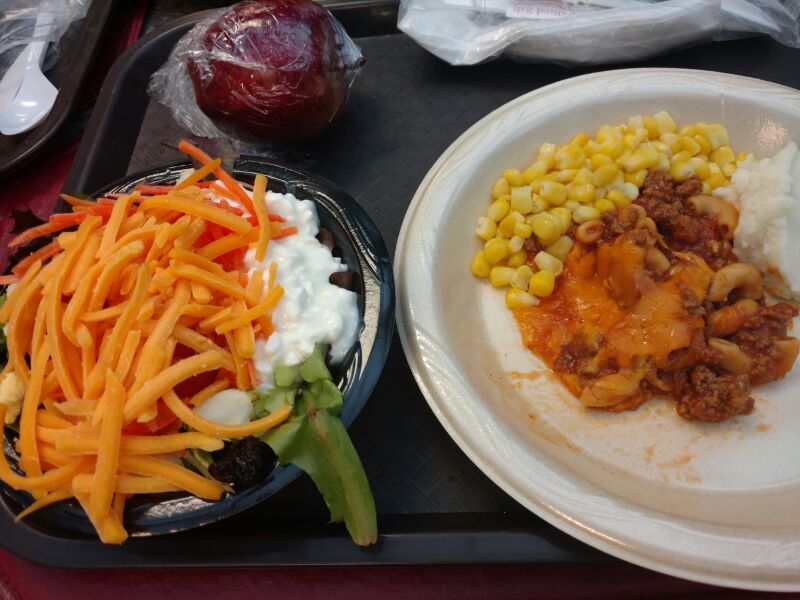 Breakfast with my bamboo fork. 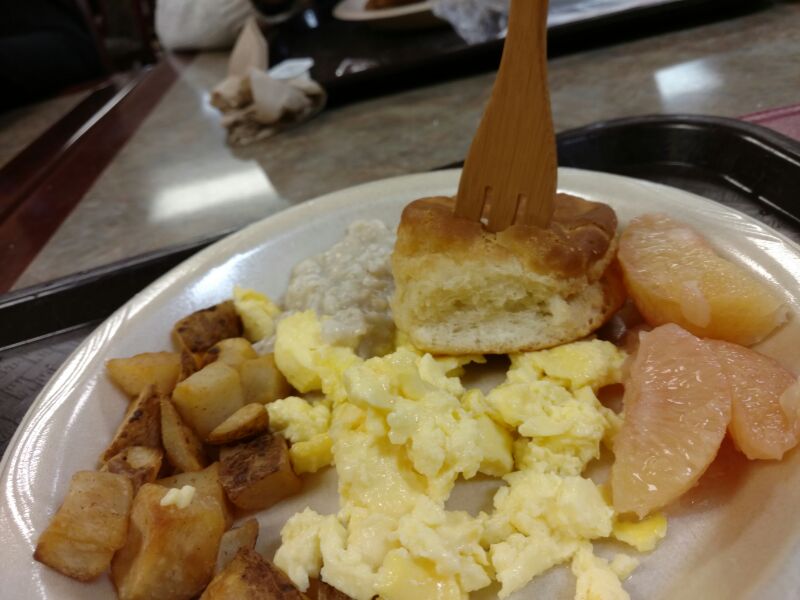 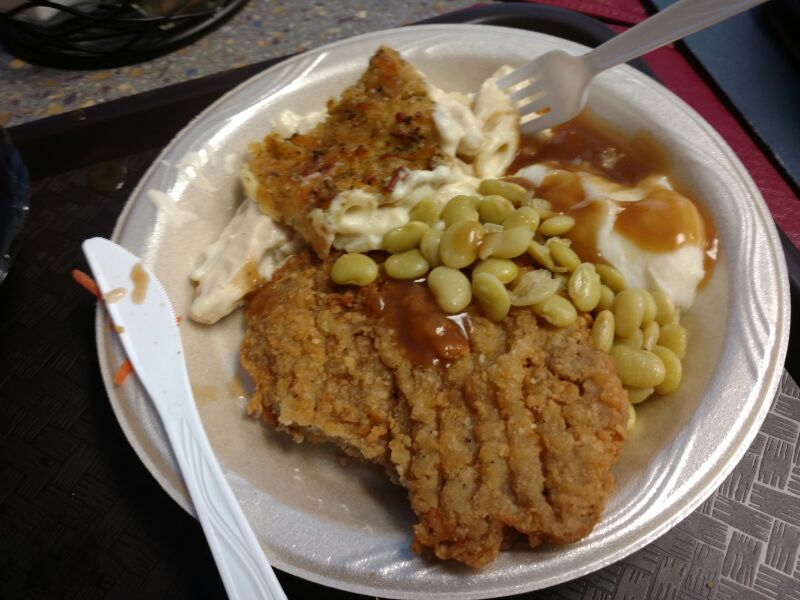 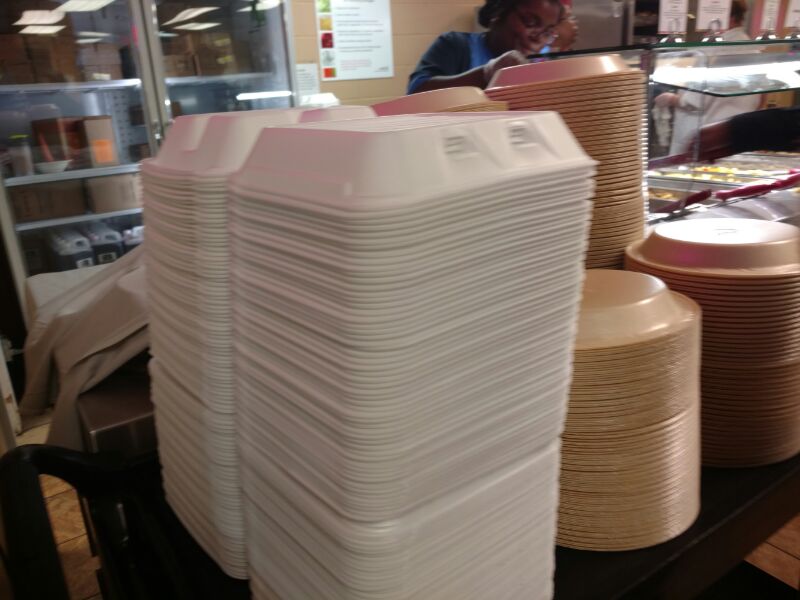 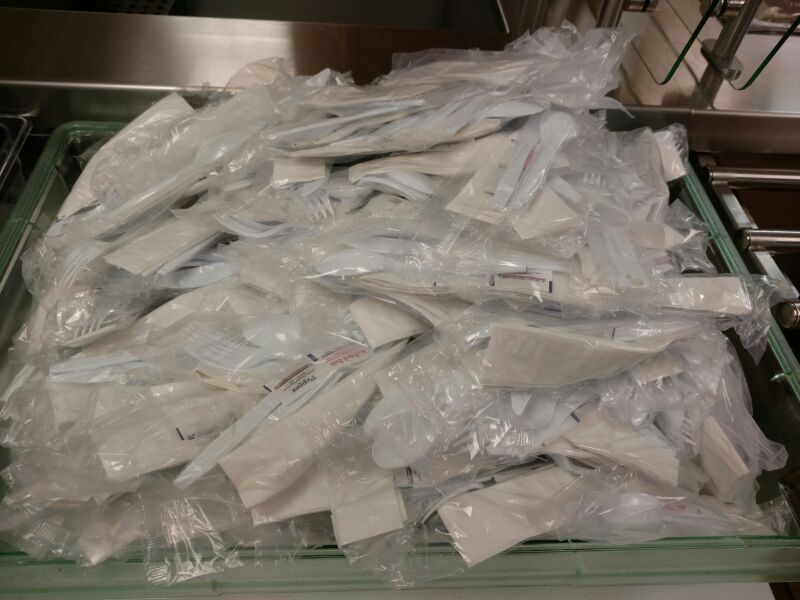 Going on a run, several of us decided we didn’t want to be trapped in the “base compound” and left the base for a run. Only to find more historic Fort McClellan outside the base.

We also found a turtle and warning signs about exploded ordinances! 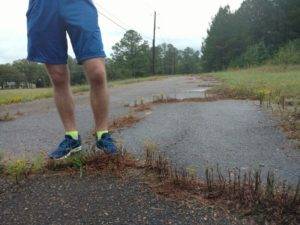 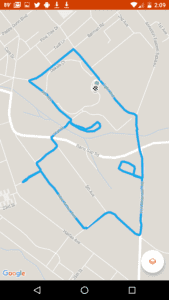 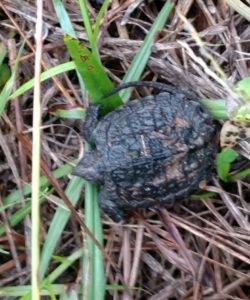 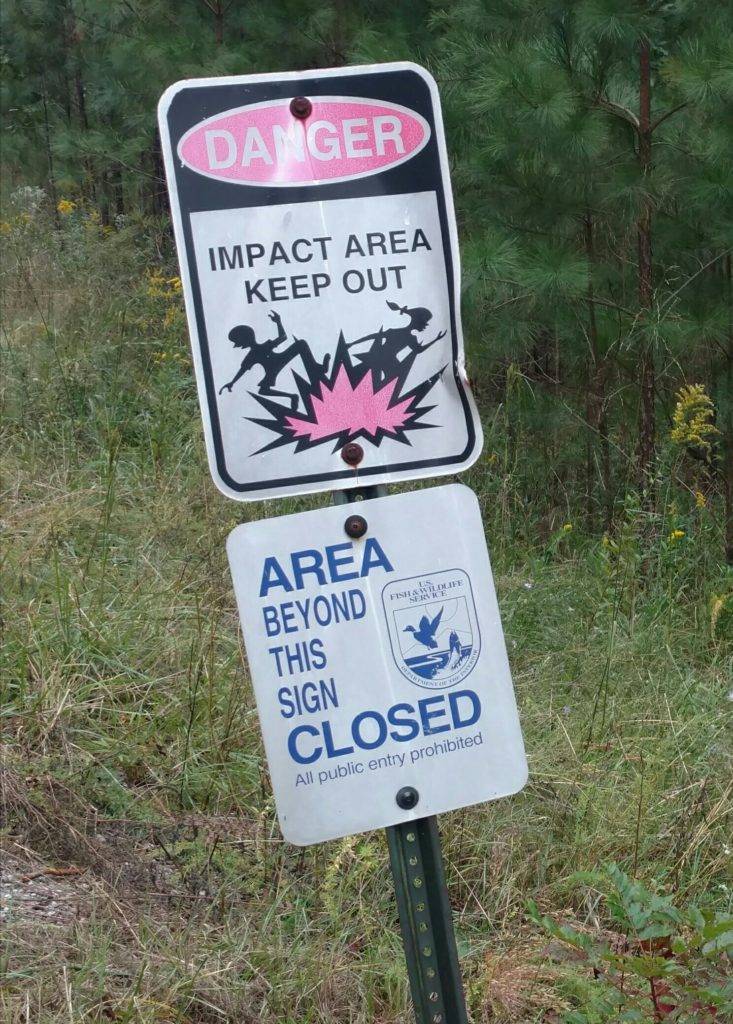